4 hours from Paris, Bourg Saint-Andéol is located on the right bank of the Rhone at 1:30 of the Mediterranean Sea and less than 2 hours from Lyon.
The nearest train station is Pierrelatte (10 km). 20 minutes from the motorway exit 19, Bollène and toll Montélimar south.

How to get there ?

The easiest way is to use the google maps application by entering “Mas Saint Antoine” or by clicking the following link:

A7 motorway coming from the north exit MONTELIMAR south
Highway A7 coming from the south exit BOLLENE
Take direction PIERRELATTE then BOURG ST ANDEOL
Take direction SAINT REMEZE / VALLON PONT D’ARC on the D4
4 km after Bourg saint Andéol you will see the sign “Mas Saint Antoine” it will turn there on the left.
A huge car park welcomes you under the oaks and olive trees.

On the right bank of the Rhone, at the foot of the Laoul forest, stands a city of 8000 inhabitants, with a surprising character. Old city, formerly called Bergoïata, Bergum and Bourg-Saint-Andiou, Bourg Saint-Andéol has the privilege to have the most historical monuments classified and protected in Ardèche and proudly displays the many testimonials it has preserved during the time : 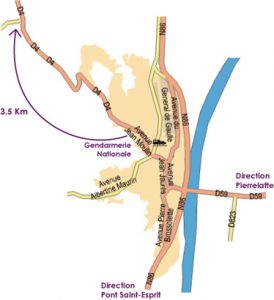 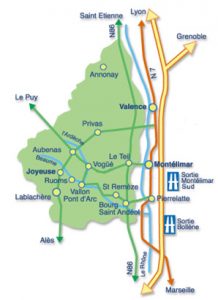